Endangered or threatened animals in the Birthplace of Rivers

The wild mountains, hollows, rivers, and bogs of the southern Monongahela National Forest hold a rare and valuable treasure: some of the last populations of the Eastern United States’ most at-risk species. These small amphibians, mammals, plants, and fish often go unseen, but they are a vital part of the varied ecosystems that would be protected by the proposed Birthplace of Rivers national monument.

The survival and recovery of these species is important for the scientific community, outdoor enthusiasts, and anyone who wants to see these plants and animals continue to be part of the landscape of the Mountain State, as they have since the ecosystem came into being. Here’s a quick look at the endangered and threatened species from the Birthplace of Rivers and areas downstream.

These species are either known or very likely to be found in the Birthplace of Rivers: 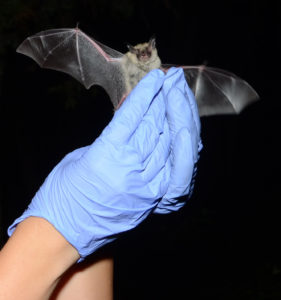 Northern Long-eared Bat (Myotis septrentrionalis): During summer nights across the forests of the Eastern United States, long-eared bats flit through the understory, using echolocation to catch the moths, flies, and beetles that they eat. Their long ears make them unique in the myotis family, and are often the only part of the bats that can be seen sticking out of the small cracks and crevices of the caves and mines where they hibernate. Unfortunately, a disease called white-nose syndrome and the destruction of the caves and forests that the bats call home have caused a large enough decline in their numbers for the U.S. Fish and Wildlife Service to list the species as “threatened.” 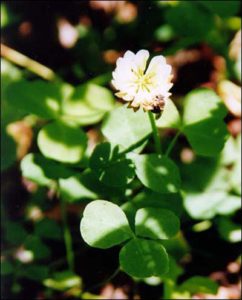 Running Buffalo Clover (Trifolium stoloniferum): As its name suggests, this plant is intimately tied to another historic species of the eastern woodlands: the American bison. Running Buffalo Clover originally grew  in the fertile patches of soil stirred up by bison, mostly in the spots where forest and prairie met. Although bison can no longer be found in West Virginia, the white flowers of their namesake clover can still be seen on the edges of the forests in the Birthplace of Rivers, especially alongside trails and streams. The clover is listed as an endangered species, however, and continuing habitat loss, combined with competition from invasive species like Japanese honeysuckle, makes the Running Buffalo Clover’s future uncertain. 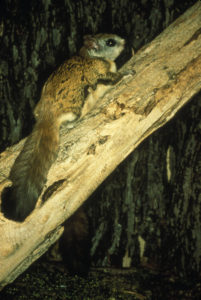 West Virginia Northern Flying Squirrel (Glaucomys sabrinus fuscus): These small mammals are a subspecies of the flying squirrels that have been gliding through North American forests since the last Ice Age. When the old-growth spruce forests that once defined West Virginia’s highlands were logged around the beginning of the 20th century, the flying squirrels were almost entirely pushed out of the region. Despite this, a few populations have hung on, living in small groups, sharing communal nests, and communicating with each other in high-pitched chirps. Steady restoration of forests have helped the flying squirrels recover just enough for the USFWS to remove their endangered status, but the threat of habitat loss still looms over these small creatures. The squirrels, which use their large eyes to navigate the nocturnal world, are tough to spot, but for now we can be assured that they are still floating through the Birthplace of Rivers.

These species possibly live in or near the Birthplace of Rivers, based on known range and suitable habitat in which they can thrive: 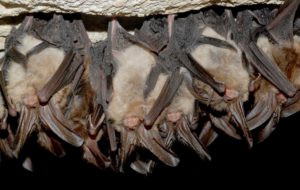 Virginia Big-eared Bat (Corynorhinus townsendii virginianus): Another bat with remarkable ears, the big-eared bat is actually smaller than the northern long-eared, and has a unique appearance. These bats are listed as endangered, and occur in only a few isolated spots outside of eastern West Virginia. In the greater Birthplace of Rivers area, big-eared bats form a crucial part of the ecosystem, since they are perfectly adapted for chasing bugs through the dense forests and bogs. 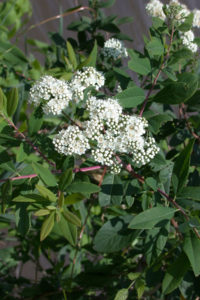 Virginia Spiraea (Spiraea virginiana): This white flower, a member of the Rose family, grows in places where tree cover is sparse enough to allow sunlight to reach the forest floor. That means the Virginia spiraea, which usually grows from three to ten feet high, can be found along the rivers and streams of the proposed Birthplace of Rivers monument, especially after flooding clears a place for it in the dense woodlands. These particular habitat requirements mean that the flowers are even more dependent on healthy river corridors than most species. Threats from development, invasive species, and other kinds of damage to river systems over the course of the 20th century have pushed the Virginia spiraea into threatened status. 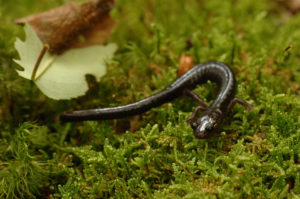 Cheat Mountian Salamander (Plethodon nettingi): This tiny amphibian occurs only in West Virginia, and nowhere else. Like many of the Mountain State’s native species, it originally lived in the spruce forests found at high elevations. Since these forests were largely destroyed, it has begun adapting to life in mixed deciduous woodlands. The species needs wet, dark forest floors to survive, partly because they have no lungs and absorb oxygen directly through their moist skin. Because of this, anything from direct sunlight to the creation of a hiking trail can disrupt their habitat. Although it is listed as threatened, the species has achieved a certain amount of stability, and, as long as the unique Birthplace of Rivers landscape is preserved, will be a defining part of West Virginia wildlife for the foreseeable future.

These species live downstream of the Birthplace of Rivers, and depend on its clear-flowing streams for their survival:

Diamond Darter (Crystallaria cincotta): This small fish, given its name because of the sparkling reflections caused by its silvery body, is another species only found in West Virginia. While it used to be found throughout the eastern Ohio River basin, dams, erosion, and pollution have killed off every population outside of the Elk River. More than perhaps any other species, this means that the Diamond Darter depends on the integrity of the Birthplace of Rivers, where the Elk River’s tributaries rise amid the forests of Pocahontas County. 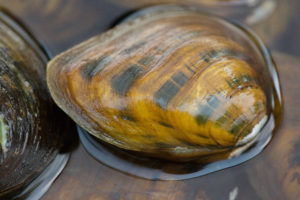 Freshwater Mussels: Mussels are particularly vulnerable to declining water quality, which means that many species of native mussels across the United States have become threatened or endangered. In addition to pollution and development, mussels also have to contend with invasive species like zebra mussels, which outcompete and sometimes even suffocate their native rivals. Vulnerable populations that live downstream of Birthplace of Rivers include the clubshell, pink mucket, northern riffleshell, rayed bean, and snuffbox mussels. Since healthy mussel populations are one of the clearest indicators of good water quality, the continued survival and even recovery of native mussel populations would be a tremendous success for headwaters preservation in the Birthplace of Rivers region.

All information presented here comes from the United State Fish and Wildlife Service and/or the WV DNR.

Businesses for the Monument

We need more seasonal balance in Pocahontas County to attract tourists year round. The Birthplace of Rivers proposal is a perfect fit for this challenge.

We need more seasonal balance in Pocahontas County to attract tourists year round. The Birthplace of Rivers proposal is a perfect fit for this challenge.
https://www.birthplaceofrivers.org/posts/testimonials/gil-willis-elk-river-inn-and-touring-center/

When you invest your money to grow your business, you need assurance that conditions on the ground won’t change under your feet. A monument grants certainty for the recreation access that defines our outdoor tourism economy.

When you invest your money to grow your business, you need assurance that conditions on the ground won’t change under your feet. A monument grants certainty for the recreation access that defines our outdoor tourism economy.
https://www.birthplaceofrivers.org/posts/testimonials/bruce-donaldson/
0
Birthplace of Rivers National Monument